I've run hosting on on WHM/Cpanel for about 15 years running on Centos. I have limited Ubuntu experience and mostly considered it the preferable option for a workstation Linux O/S alternative to Windows but realize it is a fine choice for a server O/S also.

So is there any consensus or major pros/cons on the possible paths to moving off Centos 7.9. No big rush since it's supported until 2024 but I'm thinking of migrating sooner as I already ran into one small problem is I can't update Google-Chrome package anymore on Centos 7.9 due to dependence on GLIBC 2.18 and Centos 7 can't go beyond GLIBC 2.17. Not urgent as I can stick with old Chrome version for a while (used for a scraping utility I wrote.)

Wonder what other SysAdmins think? (a) Wait for "official" Ubuntu support, (b) upgrade to CloundLinux + (can this really be done without having to reinstall Cpanel?) (c) upgrade to AlmaLinux? (d) other?

I would vote for AlmaLinux if you want to upgrade now as it is very similar to CentOS 7. You can always install CloudLinux on an existing server while keeping the data intact.
Expand signature
Andrew N. - cPanel Plesk VMWare Certified Professional
Do you need immediate assistance? 20 minutes response time!* Open a ticket
EmergencySupport - Professional Server Management and One-time Services
J

andrew.n said:
I would vote for AlmaLinux if you want to upgrade now as it is very similar to CentOS 7. You can always install CloudLinux on an existing server while keeping the data intact.
Click to expand...

This was my initial gut feeling but I'm sort of out of touch with Linux evolution as it pertains to Cpanel. In the end I just want the easiest most trouble-free migration. I see Cpanel fully supports AlmaLinux. So would following a set of instructions like this, theoretically be all that I need to do? How to migrate from CentOS to AlmaLinux

I would definitely not try this cold turkey on a production server. I've got too many things going on with various packages. I would clone the server and modify my local LMHOST file to resolve the domains to the cloned server's IP address so I can test as if all the domains (and related apps, databases, etc) were already migrated. Do that as a 'test run' with thorough testing then schedule the 'real' migration once the process is fully tested and documented.

There is the lure of starting with a 'clean slate' installing the O/S and Cpanel from scratch, then migrating the accounts but there are so many little custom things I tweaked in various areas without remembering to document, that is inviting trouble. "If it's not broke, don't try to fix it" comes to mind.

The first method looks good yes. In most cases this is pretty straightforward but as always having a full backup or testing this on a cloned server is much recommended. If you migrate over to a new server you can copy most of the configs including Apache, MySQL, Exim etc.. using the Transfer Tool but upgrading the OS is an easier way I believe.
Last edited: Oct 28, 2021
Expand signature
Andrew N. - cPanel Plesk VMWare Certified Professional
Do you need immediate assistance? 20 minutes response time!* Open a ticket
EmergencySupport - Professional Server Management and One-time Services
Reactions: cPanelAnthony

So only option to get to Almalinux is to start a new server with Alamalinux and install Cpanel from scratch, then migrate all the WHM/Cpanel data.

That is quite interesting. AlmaLinux says cPanel, Plesk, DirectAdmin all supported: 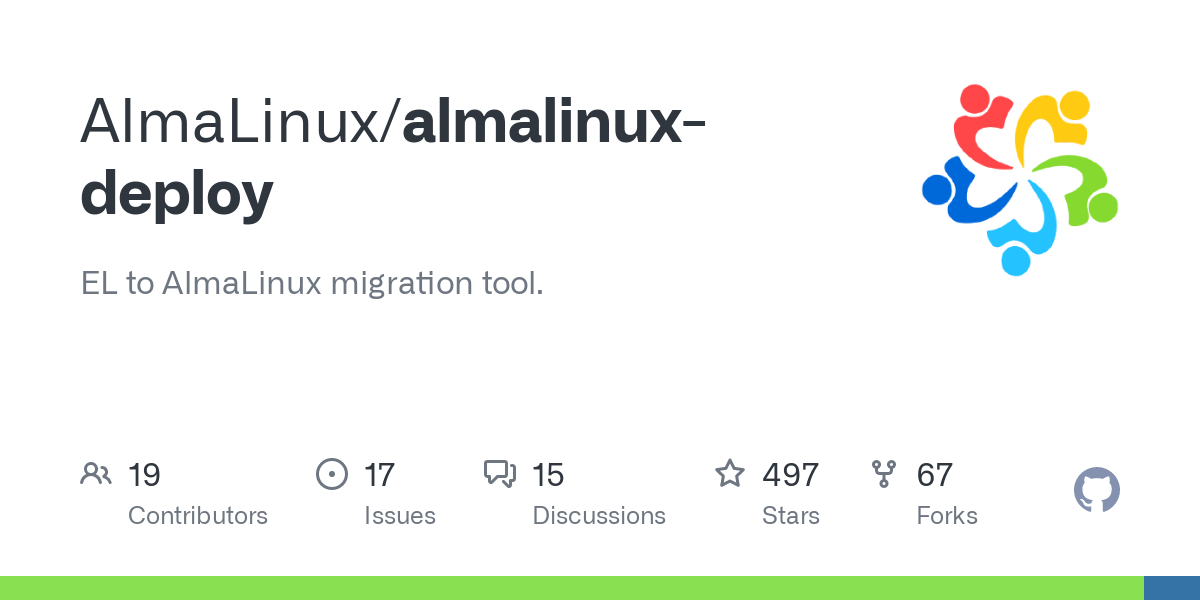 EL to AlmaLinux migration tool. Contribute to AlmaLinux/almalinux-deploy development by creating an account on GitHub.

andrew.n said:
That is quite interesting. AlmaLinux says cPanel, Plesk, DirectAdmin all supported:

EL to AlmaLinux migration tool. Contribute to AlmaLinux/almalinux-deploy development by creating an account on GitHub.

maybe can we also have some input from @cPanelAnthony here?
Click to expand...

That GitHub migration is based on migrating EL8 not EL7 to AlmaLinux. If I'm not mistaken, Centos 7 is based on EL7. Generally as a rule of thumb it's pretty difficult to do an in-place upgrade between major versions. According to Cpanel support going from Centos/EL 7 to 8 would most definitely break Cpanel. So this would break Cpanel:

How to Upgrade CentOS 7 to CentOS 8 Linux

The article shows how to upgrade CentOS 7 to CentOS 8.5. The steps described herein do not depict the official upgrade and shouldn't be applied to production.

You have to get to Centos 8 before you can get to AlmaLinux as far as in-place upgrades.
Reactions: cPanelAnthony

You are right, GitHub shows migration from EL8 to Alma 8 and actually Elevate from AlmaLinux which was recently introduced (1 month ago) supports CentOS 7 migration over to AlmaLinux 8 and that is still experimental. I'm pretty sure though that before the end of the lifecycle of CentOS 7 migration of different panels will be supported as well.
Expand signature
Andrew N. - cPanel Plesk VMWare Certified Professional
Do you need immediate assistance? 20 minutes response time!* Open a ticket
EmergencySupport - Professional Server Management and One-time Services
Reactions: cPanelAnthony

Looks like I got here a minute too late! That is all correct; you will need to migrate to AlmaLinux from operating systems derived from EL8. Anything else is either experimental or not supported.
Expand signature
Submit a ticket - Submit a Feature Request
S

Kind of makes you wonder why a totally different Linux distribution didn't gain traction after the CentOS 8 announcement.

I guess I'm just a little surprised or shocked that people didn't consider Ubuntu or some Debian derivation, but instead waited for AlmaLinux to be released.

Correct me if I'm wrong, but:

Ubuntu allows for in place upgrades. That means you can upgrade from Ubuntu 16.04 to Ubuntu 18.04 to Ubuntu 20.04 without having to rebuild the server.

Ubuntu and Debian derivations are less reliant on backported packages. So you don't have to scour the changelogs of binary packages to see if the latest security fix has been applied to a package. The version of the binary actually upgrades.

Maybe there's a specific reason that makes AlmaLinux worth the wait. To be fair, Ubuntu and Debian didn't exactly grab the bull by the horns after the CentOS 8 announcement to try and reclaim some of that market share. I have a slight concern that AlmaLinux will eventually get integrated into a licensing model with CloudLinux and then you're back to where you started. Or the funds to continue to maintain AlmaLinux will go away and some type of licensing model will be necessary. I know they've stated that they won't, but nobody can see the future, and like I said, it's a slight concern.

And admittedly I took a wait and see approach and didn't really campaign one way or another.

I really can't say that Ubuntu/Debian would have been a better path forward. There very well could have been obstacles with that path that would have made the transition difficult. And maybe there are people that are more knowledgeable of those obstacles and knew there would be difficulties. But like I said, I guess I'm just shocked that the industry never gave any real consideration to Ubuntu/Debian and just waited for AlmaLinux.

Those upgrades are not straightforward either especially if you have different softwares installed already on the server. CentOS 7 support is a long way still so those are on CentOS 7 not really worried yet for CentOS 8 there is an alternative. cPanel introduced Ubuntu support so the users has the opportunity to choose between CentOS/AlmaLinux and Ubuntu and not limited to just one option (AlmaLinux).
Expand signature
Andrew N. - cPanel Plesk VMWare Certified Professional
Do you need immediate assistance? 20 minutes response time!* Open a ticket
EmergencySupport - Professional Server Management and One-time Services
Reactions: cPRex
Show hidden low quality content
You must log in or register to reply here.
Share:
Facebook Twitter Reddit Pinterest Tumblr WhatsApp Email Link
Top Bottom